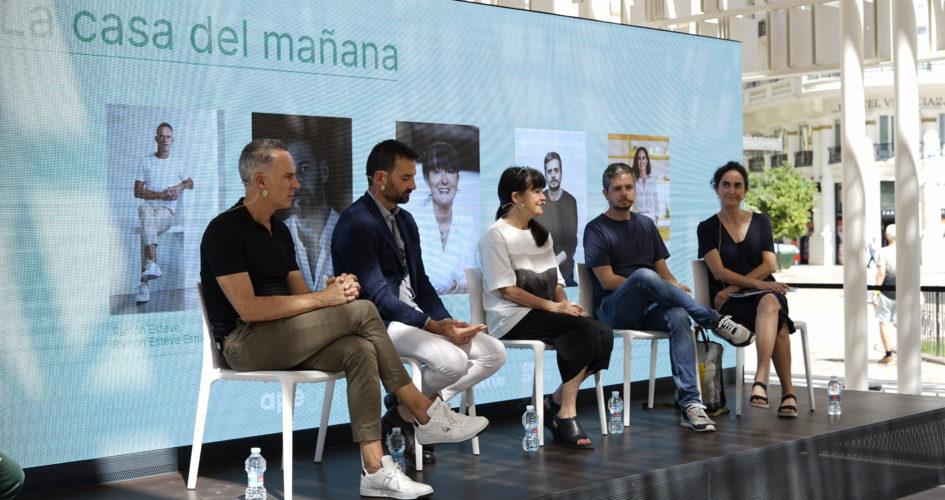 Valencia looks at the future of design through ‘The New Habitat 23-24: how the spaces we inhabit are changing‘ study. This initiative, promoted by APE Grupo in collaboration with Futurea, World Design Capital Valencia 2022, CDICV and Casa Decor, analyses trends in architecture and interior design for homes, hotels, offices and shops.

In addition to the results of the report’s results, the Àgora Valencia hosted an interesting debate forum on the future of the spaces we inhabit.

The participants reflected on concepts that have burst onto the housing scene in the last two years, such as built-to-rent, coliving, coworking and cooperatives. Ramón Esteve pointed out that residential buyers are still “very conservative” and “reluctant to introduce new formulas”.

However, the award-winning architect admitted that the new generations “place more value on experience than on possession”. This reality “has led to the emergence of very interesting new models in which, with the same resources, many more people can be happy”.

Paula Rosales, who has a long career in Madrid and New York, emphasised that “everyone is flying the flag for sustainability, but the important thing is that we can measure the impact better and transfer it to the field of health”.

Ramón Esteve stated that a profound cultural change is needed and, “sustainability should become standard and institutions should translate it into legislation”.

Erico Navazo – one of the 100 most influential interior designers in Europe according to AD magazine – said that there is a long way to go. For him, the most sustainable thing is “non-consumption, which is very difficult, so we must at least encourage ethical consumption”.

The second round table dealt with changing the model of hotels, which, following the pandemic, are facing a profound transformation. The Catalan interior designer Rosa Colet emphasised that, “the hotel should rethink its role to integrate work areas or make room for other businesses”.

Alfonso Merry, winner of the award for the best hotel in Europe with less than 50 rooms, highlighted hybridisation as a defining feature of the new hotel model. “One of the prevailing trends is to transfer the retail experience to other areas, so that the customer continues to perceive the essence of the brand – those values that it transmits and with which he identifies – but in a different scenario.”

As for the transformation of offices, Carmen Baselga, dean of the CDICV between 2006 and 2012, stressed that, despite the trend towards hybridisation between housing and workplace, “each must continue to exist as such. Although the pandemic has blurred the boundaries between the two spaces and offices have become somewhat more domestic and vice versa”.

Regarding retail, Miguel Lozano, a specialist in the development of commercial interior design, stated that traditional commerce needs to improve aspects. He added that, “one of the differentiating elements in demand is the connection of the digital sphere with the establishment”.

Finally, José Miguel Pellicer, APE Grupo’s CEO, highlighted the tile company’s commitment to going beyond creating ceramic products. He said that, “We like to reflect and research in order to propose solutions that improve people’s daily lives. The result of this exercise is the trend study entitled ‘The New Habitat 23-24’ “.

The head of the company explained that this project began in 2021 with the first edition of the study. This was ‘The New Habitat: the spaces we inhabit in the post-pandemic reality’.